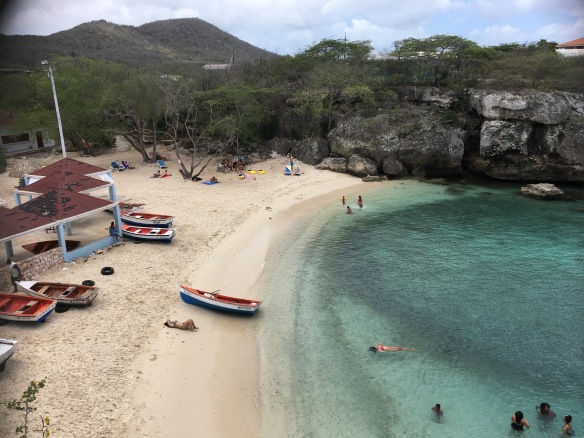 Want to know how to take a week long trip to Curacao for free? Read on and I’ll tell you.

Maybe it’s because I’m a Pisces, but I absolutely love snorkeling. I could do it all day. So for our latest trip I wanted to go to one of the Caribbean islands that had the best snorkeling that was easy for kids to do as well (i.e.; beach access). I did a little research and discovered in addition to some of the world’s best diving, Curacao also offers amazing snorkeling. Also, the temperature when we wanted to travel in late June/early July is, as it is year round, in the low 80’s and dry. I was sold.

Initially I started looking at house rentals as those are usually are first choice, but I didn’t see anything online I liked and they seemed a little pricey. Time to start travel hacking! I looked at some of the hotels on the island that are connected to chains that offer big point bonuses for taking out their cards. Hilton and Marriott were the two that came up. After some more research it seemed that the Hilton had more of what we were looking for – on the beach and good for kids. Now to accrue the points!

For the flights, I saw that AA had pretty decent award redemptions. This is where you start to do your research by looking at the various airlines’ award pages for the destinations you want. It really helps if you start looking waaay in advance, even like 2 years, so that you an see for example to get from the east coast to Curacao in June will cost me roughly X amount of points (yes the award costs change but many do remain stable over time). American Airlines seemed to have the best options for us. To get there from Syracuse was out of the question – we would have at least two layovers (no big surprise there), so I started looking at my go-to east coast airports; JFK, EWR, and PHL. The one that offered the best schedule and points redemption with the least amount of layovers (only one in Miami) was PHL, so that was the route I picked.

Then my husband and I each took out a Citibank AA mastercard. I have had this one before and gotten the award (see my Las Vegas post), but Citibank lets you take this card out every two years and I was overdue for that. Yay! My husband had never had one so he took one out for a 60k mile bonus (enough for 2 tickets), and I took one out for 50k bonus and 2 admirals club passes. I don’t remember why my bonus was less but I already had at least 10k AA miles, so I would get the 60k needed for two tickets as well. Once we met the spent to get the bonus we had 120k miles and I waited until the day the award flights came out for the dates we wanted (331 days in advance) and then we each booked one ticket for us and one for each kid. Even though they were separate “purchases” we could choose seats next to each other.

At some point over the next year I looked at the schedules again, and I realized we could get to the island earlier if we took a flight to Miami the night before with an overnight layover. Initially we were scheduled to arrive in Curaçao at 8:30pm on Tues but if we left PHL on Monday at 12 and stayed overnight at Miami we could catch the earlier flight on Tues and get to Curacao at 3pm! The good thing with AA award flights is that you are allowed to change them like this for free as long as they have availability in your category (e.g. Saver). So I called AA and switched the flights. It worked out because we were going to be in NJ the weekend before visiting our family so flying out on Monday was no problem. I then researched some hotels in Miami that were near the airport and had shuttle service (there are a lot) and booked a Hampton Inn using my Chase ultimate rewards.

For the hotel in Curaçao, I started researching how many Hilton honors points we would need per night and figured we would probably be able to get enough points for about 6 nights (that would be 234,000 HH points. As a HH gold member you get your 6th night free).  It sounds like a lot of points but Hilton’s “scale” for points is different for a lot of hotels, and you can accrue those fairly easily. Since I already took out Hilton cards for our Disney trip, it was now my husband’s turn. Luckily, Amex was offering a 100k points bonus and Citibank was offering a 75k bonus on their card. He took out both and pretty quickly he had 175k points in his account. To make up the difference he also transferred some Amex membership rewards at a 1:1.5 ratio (so I think about 20k that became 30k HH Points), and then we just used the Amex HH to buy groceries and gas for a few months because you get 6x points for those categories. As soon as he had the 234,000 needed for 6 nights, I booked it.

A little bit about the traveling itself. When you travel hack you usually get airport lounge access as one of the perks of some of the cards. I find this to be an invaluable benefit, especially when traveling with kids. The lounges are quieter and cleaner than the regular gate areas, and they usually offer complimentary food and booze (and more!). For this trip, in the Philadelphia airport on the way out I used my two AA admirals club passes that I received from taking out the Citibank AA card to get all four of us in the lounge. They had enough fresh food to make a nice snack (cheeses, crudités, hummus, soups, and fresh, made to order guacamole!), and the grown-ups could have some cocktails and relax.

We landed in Miami right at dinner time, but before heading over to  our hotel, we hit the Centurion Lounge in the Miami airport. The Centurion Lounge is the lounge exclusively for Amex platinum card members, and there’s only a handful of them. They always have a gourmet buffet with a few main courses, side dishes, and salad. So we ate dinner here before calling for our hotel shuttle. You are able to access lounges on arrival, as long as you show your same-day boarding pass.

We headed back to the lounge the next morning for a delicious mid-morning snack (we had free breakfast at the hotel), and complimentary manis and massages in their mini-spa! On the way back home from Curacao we were able to use the lounge in the Curaçao airport with our Priority Pass membership (free with Chase Sapphire Reserve and several other cards), and then when we landed in Miami we had just enough time for a quick dinner back at the Centurion Lounge, thanks to our Global Entry passes that got us through Customs much, much faster than usual (also a perk of several cards – you can get reimbursed for getting TSA pre check or Global Entry).

At the hotel in Curacao, our Hilton honors Gold status (which you get with either of those cards or your Amex platinum card), allowed us access to the executive lounge which has free breakfast and evening snacks. So we saved more money with that. Here are some pictures of that executive lounge:

We did get an upgrade on check in for $8 a night to a larger, oceanfront room. We asked about upgrading to a suite but the hotel, being older, does not have suites with separate rooms. The manager told us even their “executive” rooms just have a larger sitting area. So we got a room that had more of a sitting area than the standard rooms.

Our other expenses for the trip were rental car and food. I read online that the driving is fairly easy in Curaçao, and necessary if you want to do a lot of exploring (we usually do). In March, Chase was doing a promotion where you could get 10x ultimate rewards for hotel and car rentals booked through their travel site, so I booked the car through them for $175 for the week (and I got 1,750 UR for that).

The food on the island was equivalent in price to the US, although we have been traveling in Mexico so much the last few years we were in a bit of sticker shock. It’s not the peso! But we did a mix of restaurants and street food so overall it wasn’t too bad, especially considering our air travel and lodging was free!

My review of the hotel gives it a B+. It was dated and could use new carpets and furniture. Also I never really got hot water. The grounds were amazing though. They have two incredible beaches. The main beach was awesome for snorkeling. I saw so many varieties of fish and even some squid! They also have a 2nd beach that is shared with a beach club owned by the same guy who owns the Hilton. The two times we went to that beach hardly anyone was there. That one had more waves for th kids to jump and they loved it. Their pool was also awesome and the view was incredible. They also have a dive shop, a casino, an Italian restaurant, 2 bars, a coffee shop, and a spa an exercise classes (so I’ve heard, lol). The staff was great, especially in the executive lounge, and parking was free which was awesome because we definitely made use of the rental car to explore the island.

The Hilton (the black marks on the corner are from my weird phone case, not an impending storm!)

Now for the fun part!

The island of Curacao was simply amazing. It had picture perfect beaches, incredible snorkeling, great food, and interesting culture and history. It was such a cool coincidence that I happened to travel to Amsterdam 6 months ago so I could see the similarities- in architecture, food, and culture. There were parts of Willemstad that almost looked like Amsterdam with the cafe culture and food, but with a Caribbean flair.

The west side of the island (where the hard core divers stay) was like a different world. It was a sparsely populated desert, almost like Arizona or Nevada, with amazing beaches on the edges. It was more quiet and laid back and if you wanted to truly escape, renting a house in this side would be incredible.

I wouldn’t hesitate to recommend a trip to this island with kids. There are a few activities such as Hato caves and the aquarium and the rest of the time you could just swim and snorkel to your hearts content. Here are some more pics from the trip: 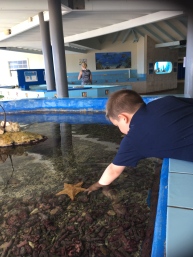 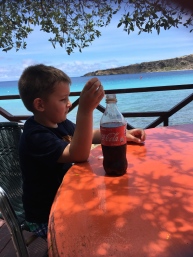 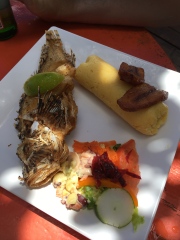 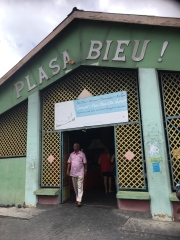 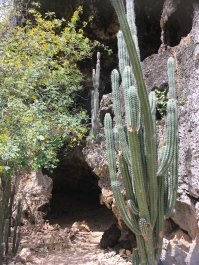