Winter in Syracuse. It’s long, it’s grey, and there’s more snow than anyone who hasn’t lived here can imagine. They also do this odd thing that so far I’ve only experienced in Central New York, the kids get off for a week in February, it’s called “February Break.” Usually since my husband has to work (his break is in March), we put the kids in a camp for a week. This year I thought, I can spend $600 on camp for both of them, or I can see what travel deals I can find so we can spend the week somewhere warm and tropical. Of course, since my husband had to work it would be just me and the boys, but he approved and so I got about researching.

For convenience the obvious first choice is Florida, but we already had a trip booked there for April break and honestly February was a little too iffy for me, weather-wise. If I am going to escape the great white north I want to make sure we’ll have lots of heat. So the next step was to search flights for the Caribbean. The easiest way to do this is to use the google flights explorer. You can’t just google this for some reason though. You have to actually type in the web address http://www.google.com/flights/explore

Once you do this you can put in an area you want to travel to, like “Europe” or “Caribbean,” and some graphs will pop up showing you different dates. As I was searching for the cheapest flights a lot of what came up were islands recently hit by the hurricane, such as Puerto Rico and Barbados. But also, Turks and Caicos popped up for $280 on Delta, round trip from Newark over Feb break. Hmmm. I hadn’t considered TCI but after some research it seemed like a great option, especially for traveling alone with the kids. It’s safe, kid-friendly, and they speak English (cutting down on the stress factor). Bingo! Since I have the Amex business platinum and I had chosen Delta as my preferred airline, if I bought the flights using MR rewards points, I would get 50% of those points back. So the total spent was 28,000×3=84,000 MR points, but with 35% back the total MR points spent was 54,600. Not bad for 3 RT tickets!

For lodging, I started searching hotels and Airbnbs. I’m not gonna lie, TCI is expensive this time of year, but I was able to find a 2 bedroom Airbnb for $150 a night. That’s about half was most hotels there cost (and don’t even think about a mega-resort like Beaches or Club Med). Now, we would not be on the beach or have a pool, but the trade off is we get a whole cottage with a full kitchen to make some of our own meals. I could have used my Chase UR points to book a hotel but I didn’t feel like spending my cache of points on lodging so we went with the Airbnb. Plus, for reasons I’ve already stated so many times, I just usually prefer Airbnbs. You get more for your money and they are usually so much better for kids. I love having our own apartment or house. It’s so much more convenient and it’s cool to live a little more “local.”

Here are a couple pics of the place. There were also two bedrooms. Nice and large and bright! 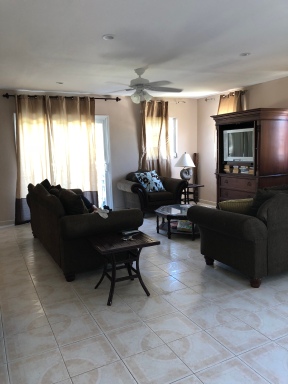 Finally, I booked a snorkeling excursion using my Chase Ultimate Rewards points. In addition to flights, hotels, and rental cars, you can use Chase UR to book lots of tours and excursions (usually the ones booked through visitor). So the $300 boat trip was also free (minus tipping the guides of course).

Our flight did not leave Newark until Monday evening of the break, so we decided to drive down for the weekend to visit family, especially my Father-in-law who just moved into a nursing home in NJ. So we drove down with my husband and he left us at my mom’s house in NJ and drove home Sunday. Monday was my birthday but my mom was sick so we didn’t do much, and we took an Uber to the airport that afternoon. After visiting the priority pass lounge there for “dinner,” (kind of gross), we boarded our flight for Atlanta. We landed in Atlanta around 9:30, but it took FOREVER to get to the hotel shuttle because the air train was broken down. We finally made it to our Hampton inn around 10:30pm (have I mentioned how I always use Hampton Inns?), but thanks to digital check in and a digital key on my phone, we got in the room and went right to bed. The next morning we got up, ate the free Hampton breakfast, and took their shuttle to the airport. OMG the Atlanta Airport is HUGE! We then had to take another 15 min shuttle just to get to the international terminal! Luckily we got there early and so were able to visit another Priority Pass Lounge (the Club at ATL), which was much nicer than the one at EWR. The flight was a few minutes delayed but they got us boarded quick and we took off right on time.

We finally landed in Providenciales around 2pm. Immigration and customs was a breeze and we went straight to the rental car place to pick up our tiny little McCar. Now was the moment of truth, I had to drive on the left side of the road! To be honest I was kind of freaking out about that since I booked the trip. But I took a deep breath, asked the kids to STFU, and hit the road! It was actually not as bad as I imagined, it just takes some extra concentration.

Our Airbnb was really nice, in a residential neighborhood so we had to drive wherever we wanted to go. They provided beach towels and chairs for us and one of the nicest and least crowded beaches was a two minute drive away. We split our time between that beach and some of the more crowded beaches in Grace Bay, especially one in an area called “The Bight,” which has a reef for snorkeling.

As far as the trip, here are my pros and cons on Turks and Caicos

For most of the trip we just spent time on the beautiful beaches and checking out some local restaurants. We did go to the Thursday night fish fry (like a food stand market) and we did our snorkeling trip where we got to visit a little island with lots of iguanas. To be honest,  if the kids were older or I had another adult with me, we would probably have done some more adventurous activities, but I kept things pretty low key.

Here are some pics. The light was incredible so it was hard to take a bad one! 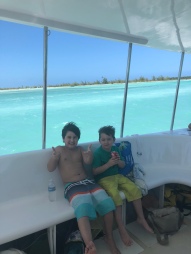 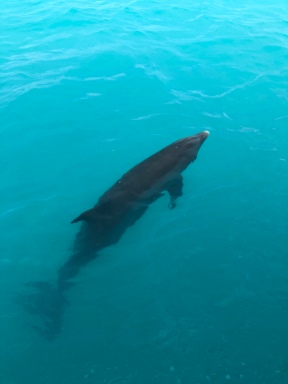 Overall it’s a nice choice for a winter getaway, especially from the east coast of the US. I would love to get to Grand Turk and Salt Cay one day, which are supposed to have a very different vibe; to get there you would take an extra little flight from Providenciales. I’ll save that one for when my husband can join us.