Apparently this has been the longest winter in 40 years in Syracuse. By April 19th, it was still snowing. Thank goodness I booked a trip to south Florida for the kids’ April break!

I had a feeling we would be wanting to get somewhere warm in April, so I started looking at flights to Ft. Lauderdale so we could visit my uncle. I was able to find 3 round trip tickets on Delta for $360 each. Kind of high but they must have been jacked up because our area had spring break that week. I used my AMEX membership rewards to book using the 50% points back feature (I think this was the last trip I was able to use this before it went to 35% back), so it ended up being 54,000 MR points total for the flights.

For the room, I started looking for hotels in the Deerfield Beach/Boca Raton area on the Chase Ultimate Rewards travel site, and lucked into the Hyatt Place downtown Boca Raton for 9,000 points a night! That’s really cheap and I think it was because it was a new hotel and they were running a sale to get people to book. We got a room with a king size bed and pull out sofa and free hot breakfast for 4 nights for 36,000 total ultimate rewards points.

I then looked at car rentals and was able to find one for only 9,000 ultimate rewards for the four days.

Now here’s where it started to get really interesting. A few months before the trip I received a call from Delta that they had overbooked our Saturday morning flight, and they asked us to change to a flight that was about 40 minutes later and connected in the 7the gate of Hell, AKA LaGuardia airport. I vowed I would never set foot in that airport again, however I called them back and asked if they had any other flights available, including the night before. They were more than happy to switch us to a 5:40pm flight on Friday connecting through Detroit. So we could just head to the airport after the kids got out of school and gain and extra half day in Florida! They also offered us $300 in travel vouchers or 30,000 skymiles each in compensation! I took the skymiles because I knew I could use those for flights that were worth more than $300, especially if I combined them with the “pukemiles” we earned in October and March (see my last post). So we banked 90,000 skymiles total and got more time in Florida. Winning!

The only caveat was I had to book a hotel for Friday night. When I looked at the Hyatt the points price per night had gone up significantly, so I looked at some other options. I ended up settling on a Hampton Inn for 13,000 Ultimate rewards a night.

The flights were great, and we even got mysteriously upgraded to Delta comfort (more legroom and free adult beverages, yay!) on the first leg. I have no idea how or why but I’m not gonna look a gift horse in the mouth.

We got to the hotel at around midnight and crashed. The next morning we were scheduled to take an airboat ride at 11am, so we hung out at the Hampton Inn to eat their free breakfast and go for a swim. Unfortunately the pool was gross and full of bugs, AND they had no hot water in the whole hotel! I really wanted a shower after all that travel but not enough to take a cold one. I complained to the front desk and Hilton Hhonors online, and was given 35,000 Hilton Hhonors points for my inconvenience.

After that we met up with my uncle and got to take our first airboat ride through the Everglades. It was so much fun and we spotted about 15 alligators! 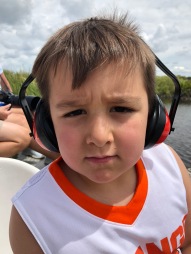 We spend the rest of the day chillin at my uncle’s pool and we finally checked into the Hyatt, which was very nice and brand new, right in downtown Boca Raton. That night we went to bed early and were woken up out of a dead sleep by the fire alarm: “emergency!! Please evacuate the hotel. Do not use the elevators!” I figured it was a false alarm but still scary, especially since we were on the 9th floor.

The pool at the Hyatt

breakfast at the Hyatt (included in room!)

The following day we spent some time at the hotel pool and met up with my uncle to visit Green Caye nature reserve in Delray. This was a really cool park with lots of boardwalks over the wetlands to walk and view nature. They also had a nature center with some aquarium tanks but it was closed. We had a fun walk, despite some downpours. The rain cleared up when we left so we decided to visit Sugar Sand Park in Boca. This place was the best park for kids I’ve ever been to! They had a huge playground area with a huge, multi-level play structure, water misters, and a bunch of other unique playground equipment. They also had a carousel and an indoor science center, which was as nice any science center I’ve ever been to (just smaller), all for FREE (they do accept donations)! The kids had a great time playing and after that we went for dinner at a taco place in Deerfield beach called El Jefe Luchador. 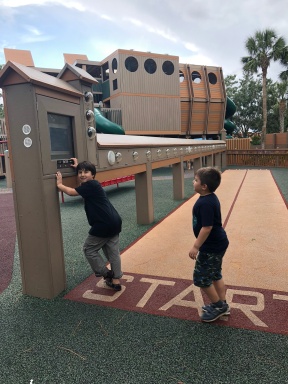 The following day we met my uncle at another amazing park (also donation only), called Gumbo Limbo Nature Center in Boca Raton. This place also had nature trails as well as an indoor nature canter, a turtle rescue center, and aquarium tanks. We were able to see a lot of it before they shut down the outside parts due to an impending thunderstorm. Eventually we left and the kids and I went to a fabulous restaurant for lunch, Fran’s Chicken Haven, for some legit, fresh fried chicken. This was one of the best fried chicken I’ve ever had and definitely a must-eat if you are in Boca.

We tried to go to the beach after that but there were warnings for a rip tide, sea lice, and jellyfish, so we decided to stay at the pool. For dinner we met my uncle at The Funky Biscuit in Boca, which has live music almost every night and great food and drinks (try the biscuits)! The music was great but the kids started to get tired so we went home about 45 minutes into the performance.

On our last day the kids and I enjoyed more pool time in the sun, and then I dropped them off at my uncle’s house while I had lunch with friends in downtown Delray Beach, which was a cute little area with lots of shops and restaurants. For dinner we met my uncle at a restaurant called Junior’s, which has New York deli style food. It was so good. We had matzoh ball soup, latkes, roast beef and brisket sandwiches, and for dessert we tried their famous cheesecake.

The next day we got up at 3am to make our 5:40 flight and headed home! All in all a super fun trip with lots of amazing parks, great food, and sun!!! And even better is we spent very little money, given that all of our outings (except for the airboat ride) were free, we had free breakfast every day and ate at relatively inexpensive restaurants, and finally ended up with 94,000 skymiles and 35,000 Hilton Honors points.