I have wanted to check out Jamaica and specifically Negril for a while now. I had decided that Christmas break would be a good time because the kids would have off and we could fly out of a major airport after visiting our family in NJ for the holidays.

So to try to book travel during the week between Christmas and New Years on a budget (including a points budget), is very challenging. This is probably the most expensive week to travel, especially to warm, beachy places like the Caribbean. I knew it would be tough and cost a lot of points but I was up for the challenge.

Sometimes when you don’t have enough points for round trip flights you need to get creative and look at one-way flights on different airlines. I had enough Alaska airline miles to book us one-way, so I booked us on American Airlines from Montego Bay (MBJ) to Philadelphia on 12/31 for 17,500 miles each, 70,000 total. Now to had to figure out how to get to MBJ. I found flights leaving at 9am from JFK to MBJ on 12/26 Delta for $407 each. Since Delta was my preferred airline with American Express business platinum I could buy the tickets for 162,840 membership rewards (MR) points and still receive 50% back. So total MR rewards spent was 81,420 (or 20,355 per ticket).

I really wanted to stay in Negril so I started looking at lodging on the Chase ultimate rewards portal. Eventually I decided on the Traveller’s Beach Resort on Negril because it was affordable and got great reviews. I bought 5 nights for 63,858 ultimate rewards. Now keep in mind this is about twice what this hotel usually costs, however I find that most hotels triple their price for that Christmas-new years week.

So, Christmas 2017 happens and we are down on NJ at my mom and step-dad’s house, with all of our stuff packed for Jamaica. We were planning on hiring a car service to drive us to JFK the morning after Christmas and since we came back through Philly we would do some combo of the train and Uber back to my moms, no big deal since they are about halfway between NYC and Philly. Unfortunately, life had other plans. My father-in-law has a major health crisis that landed him in the hospital. He stabilized but it became clear pretty quickly that my husband would need to stay in Philadelphia to help take care of while they figured out the next steps. We thought of every possible way but in the end there was no way we could make it to Jamaica. After many phone calls on Christmas Eve with the various companies, we were able to reschedule our trip for May. For the flights there, Delta agreed to waive our change fees so I just picked the same flight in May but leaving from Syracuse and commenting through JFK. With Alaska, they charged me change fees because they said they have a rule that there are no exceptions. I think it ended up being $200 total in change fees and I booked flights that landed in Syracuse as well. At least if we were going to have to stick with the exorbitant Xmas week prices we could travel throughout home airport.

The hotel got a little tricky. I did book the room as non-refundable (on points), because that was all that was available at the time. When I called to see if there was anything we could do, they said they could refund the last three nights but we would be out of luck for he first two. I thought I would need to file an insurance claim through Chase travel (included with your Chase Sapphire Reserve card) and started that process, which was going to entail tracking down doctors who treated my father-in-law. I also called Chase travel and explained my situation and the woman on the phone (working on Christmas Eve), was so helpful she actually called the hotel while I was on the phone with her and got them to refund the points! All of the original points spent were re-posted almost immediately! When I went back on the Chase travel site to book the room for May, the price had decreased significantly and I was able to get the room for 7,000 ultimate rewards points a night, for a total of 35,000 ultimate rewards!

We flew Delta from Syracuse to JFK at 6am and had about an hour layover at JFK. Our gate was by the Delta skylounge, where my husband and I could get in with our Amex Platinum cards but they would have charged us $29 for each kid. Instead I went in quick, wolfed down some food, and made Malk and the kids some “to go” breakfast sandwiches.

We landed in Montego Bay a little early and went to Club Mobay, which is an arrivals lounge you can get into with your Priority Pass card. They had some snacks as well as rum punch for us and lemonade for the kids. After that we exited the airport into a downpour, but found our transport which I arranged ahead of time with Joe Cool transportation, whom I highly recommend. We then had a two and a half hour drive to Negril down the west coast where we got to experience Jamaican traffic and see some small towns.

When we arrived at our hotel we had some food and played in the ocean and pool. It was still a little overcast and rainy. The next day we also spent mainly at the beach and pool, and we were able to try some local Jamaican cuisine such as salt fish and ackee, johnny cakes, patties, jerk chicken, and escoveitch fish. 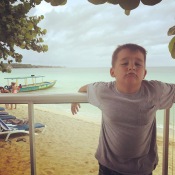 Hangry at the hotel 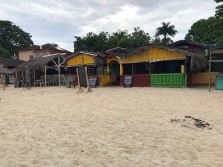 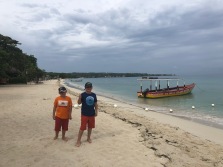 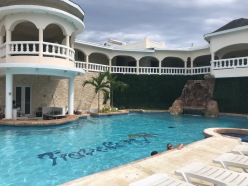 Our pool at Traveller’s

Patty! So good I couldn’t wait to eat it before I remembered to snap this picture! 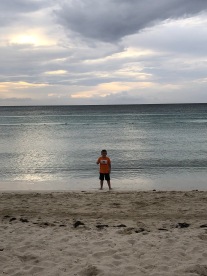 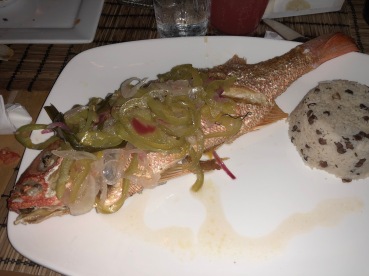 The following day we were picked up by Joe Cool again for a tour of YS Falls and a Black River safari. Our tour guide was super nice and taught us about the local towns and culture. We hit YS falls first which was very cool. When you first buy your ticket they take you in a jitney up to the falls. It’s very well laid out and you climb up steps to a part of the falls where you can swim and swing on a rope swing into the water. The kids were too nervous for the ripe swing but the hubs and I channeled our inner Tarzan and Jane. They also have some really nice salt water pools throughout the property and a decent little grill. Once we had our fill of swimming we got back in the car and headed to the town of Black River, where we did a tour down the river on a pontoon boat to see the mangrove forest and several crocodiles! They also had a small nursery where the kids got to hold a baby croc. 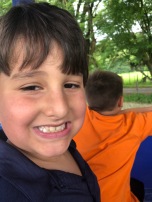 jitney up to the falls 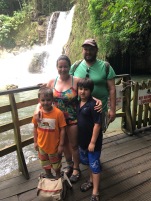 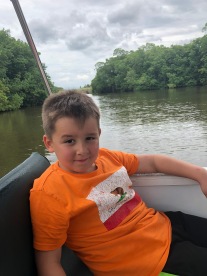 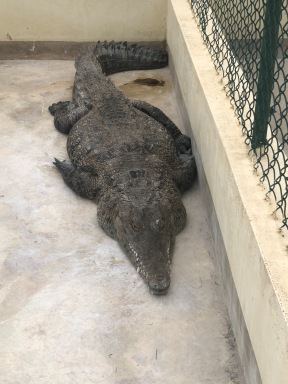 The next day we took a glass bottom boat ride out to the reef, where we were able to snorkel for over an hour. My oldest son went right in the water but my youngest took a little coaxing because he got scared from a snorkeling trip we did in Turks and Caicos where the water was kind of rough. Eventually my husband convinced him to go in and both kids had a great time floating around. The reef looked fairly healthy here and there were lots of colorful fish and sea urchins. Unfortunately my underwater camera stopped holding a charge so I didn’t get any pictures. On the way back we cruised along 7 mile beach and were able to see a lot of the resorts that line the beach.

View of the beach from the water

The rest of the day we hung out at the hotel and later that evening we headed out to the famous Rick’s Cafe. The place was definitely a tourist trap but it was cool to see some cliff jumpers dive off the high cliff. 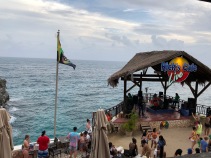 On our last day we just swam and ate, making sure to get some last patties and jerk chicken. The following morning we headed out early and made it to the airport with some time to go to the Club Mobay departures lounge (we could get in with Priority Pass), which was very nice with a good food selection. Our flight to Philadelphia took off on time, and thanks to our Global Entry/TSA pre-check, we flew through immigration! I have gone through immigration and customs at PHL a number of time, and it is always horrendous and can take over 2 hours. We made it through in 15 minutes, mostly because of walking!!! We then headed over to the Centurion Lounge, however unlike on our recent trip to Mexico, it was incredibly crowded and we barely got a place to sit. We were able to finally find a spot and got on our next flight to Syracuse. All flights were on time without issues!

Overall, we loved Negril and Jamaica. The food and culture were great, the beach was amazing, and we loved getting out to do a few excursions off the beach. We were warned that the hustlers on the beach were very persistent and they did not disappoint. And of course, I felt like I had a contact high as the whole place was covered in a cloud of ganja smoke. I also have to give a shout out to a few of our places to eat: Hammond’s bakery in Negril (for the best patties!), Kayuba restaurant, Naila’s on the beach, Cafe Goa and Coletta’s. I also loved Traveller’s Beach Resort! What a wonderful little resort right on 7 mile beach. The pool was awesome with a waterfall that the kids loved swimming under and the staff was fabulous. It’s super affordable, even without points, so if you are looking for a budget-friendly but nice place to stay in Negril, check them out.