Ah sweet Carolina. Some people may not realize this, but North Carolina is almost a second home to me since my Dad lived there from when I was about 10 until after I graduated from college. I would go there about 3-4 times a year. My brother also attended 3 universities there and eventually graduated from UNC Chapel Hill. Although I don’t currently have any family there, it has been about 15 years since I visited NC and I was longing to go back. If you’ve ever been to North Carolina you’ll understand why.

Unfortunately getting there from Syracuse was near impossible. It’s a 10+ hour drive, and there were no direct flights. Plus flying between two small airports often equates with exorbitant prices. So when Syracuse airport started offering direct flights to Raleigh-Durham on Frontier airlines last summer, I knew I had to catch one!

I looked ahead to when the kids had a three-day weekend from school, and found $80 round trip tickets on Frontier for Veterans Day weekend. I booked these and then looked at lodging. While I really like the Raleigh Durham area, I absolutely love the Blue Ridge Mountains, especially the town of Boone, where Appalachian State University is located. I decided we could drive straight out there when we landed that afternoon and have a few days in that area before heading back to Raleigh.

There was another reason we wanted to go this area, however. When my son was in kindergarten he was obsessed with a type of lemur called the “Aye-Aye.” Back then he told me about the Duke Lemur Center (I have no idea how he learned about it), and asked if we could go. Well it took 6 years but we could finally plan a visit.

I booked a La Quinta Inn in Boone for two nights for 17,319 Chase Ultimate Rewards points total. For our last night I decided to stay in Durham and found a Homewood Suites offering a 2 bedroom suite for the same price as all of their other rooms, $109 a night!

I picked the kids up from school early to make our 12:35pm flight to RDU. Luckily we got to the airport with enough time to make use of our Priority Pass lounge benefit at our airport’s only “lounge,” Johnny Rockets. We get a $28 credit per person which was enough to cover our food (minus the $5 tip). The flight took off on time and was great. Since Frontier is a discount airline you do have to pay for your bags, both checked and carry-on. This wasn’t my first time at this rodeo, so I paid for one carry-on bag, and paid for it using my American Express gold card, after setting my preferred airline to Frontier. I get a $100 credit per calendar year for airline incidental fees such as bag charges and seat assignments, and since I had just received the card I hadn’t used this year’s credit yet. For both ways the one bag cost $74 which was reimbursed through this card. I’ve written another post about how to fly these discount airlines without getting soaked in fees. If you really want to make sure you get a good deal you have to learn how to pack lightly and efficiently, including maybe taking one carry-on bag, plus “personal items,” for 3-4 people. Sometimes we even try to fit everything in our free personal items (which can be a small backpack). I also talked to a rep on the phone ahead of time about whether they had a policy about seating parents and children together and he assured me it would not be a problem. Sure enough, when I checked in, we were all seated together. 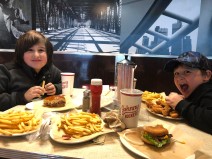 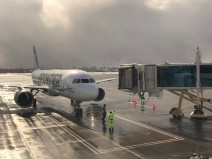 Pack light!
After landing at RDU we headed over to the rental car company. After I checked in and went to the aisle to pick up the car we got a nice surprise. The worker asked how many bags we had and I told him, just the one small suitcase and our small backpacks. There were two Mustang convertibles nearby, and he said, “you want a Mustang?” Well the kids started jumping for joy right there in the spot. I think this was because it was a holiday weekend and they were running low on cars, and there’s not as much of a demand for convertibles on a “chilly” weekend in Raleigh, so I’m sure he wanted to give that to us and save a sedan for someone else. But we were so excited to cruise around in it! It was yet another time when packing light pays off! 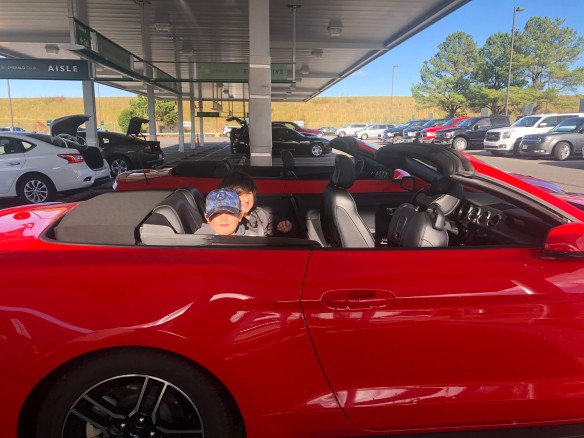 We drove about 3 hours out to Boone and checked into our hotel. On recommendation from the hotel clerk we went to dinner at a restaurant called the Pedalin’ Pig for some authentic Carolina BBQ. My older son and I shared a platter with pulled pork, ribs, and smoked brisket and several southern sides and it was absolutely delicious. 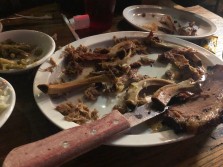 …after
The next morning, after our complimentary breakfast, we bought some discount tickets for nearby Grandfather Mountain from the front desk (saving about $10) and headed over to the park. It was good we got there early because the lines into the park later in the day after we were leaving were super long. 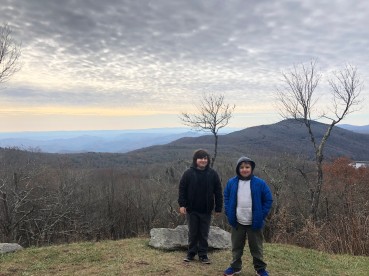 Grandfather mountain has a nice nature center with a small little zoo housing local animals such as bears, elk, otters, and eagles. After seeing these exhibits we took a short hike up to the top with the swinging bridge for some amazing 360 degree views. 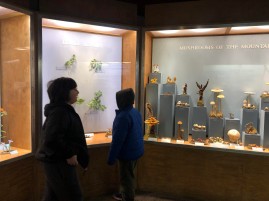 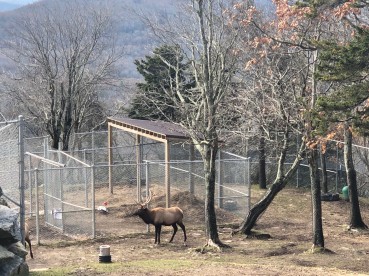 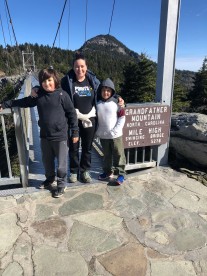 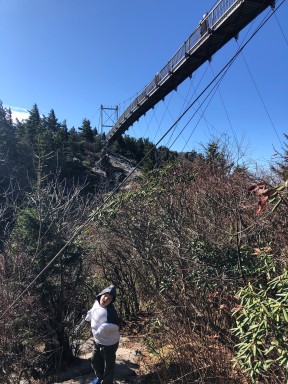 It had been a chilly morning but when the sun came out it warmed up. We were so excited to put the top down and cruise along the Blue Ridge Parkway, stopping at some of the viewpoints. We drove up to Blowing Rock, a quaint little tourist town with shops and restaurants, already decorated for the holidays. We ate a delicious British-inspired lunch at Six-Pence Pub,and then headed back to Boone, cruising the parkway a little more on the way back.

After a swim in the pool we headed out to downtown Boone to walk around and get dinner. It was great to revisit the town, and we had fun exploring all the vintage toys, candy, and other unique items at Mast General Store. We found an inexpensive Pho restaurant for dinner and then headed home. 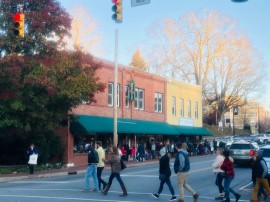 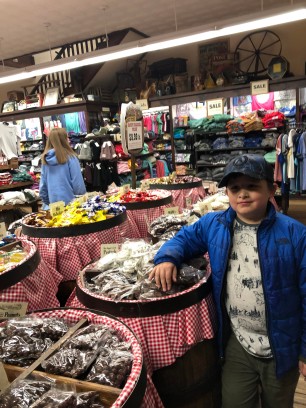 Pho sure
The next morning we decided to check out the North Carolina Zoo, as it was on the way back to the Raleigh Durham area. Because we have membership at our local zoo that is a member of the reciprocity program with the AZA, we were able to pay only 50% admission for $33 total. The North Carolina zoo is huge! It bills itself as being the largest natural habitat zoo in the world. The animals are kept in very large spaces which makes walking between them quite a trek! Fortunately once you get from one side to the other they have a tram to take you back. 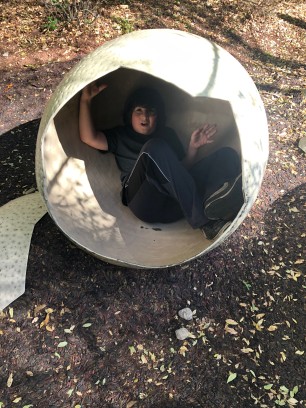 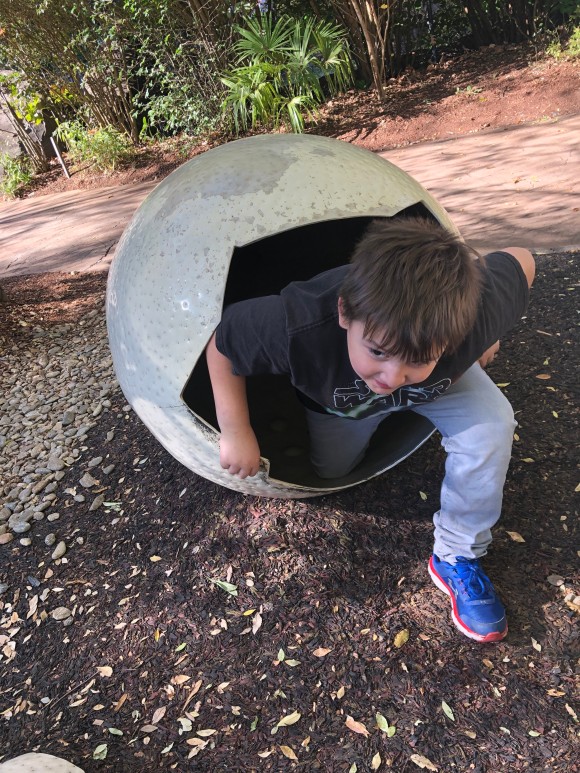 We left the zoo around 2 and got to our hotel in Durham around 3:30. The suite we booked was enormous! It had a kitchen, living room, bedroom with two full beds and bedroom with a king bed, plus two bathrooms.

After enjoying the space to spread out for a while, we eventually headed out for dinner. We went to a small Mexican, “hole in the wall” taco stand called “Tacos Nacos” which had received great reviews online. It certainly lived up to the hype! We had some of the best tacos we’ve had outside of Mexico. Plus it was super inexpensive at $2-3 per taco. 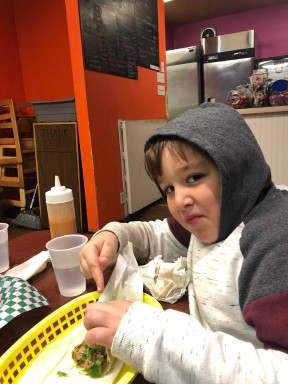 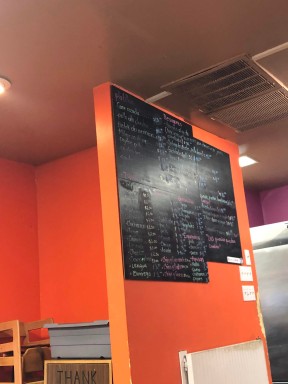 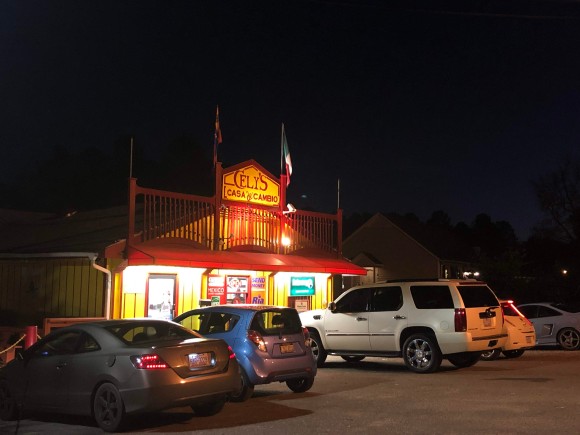 For dessert, we drove to Raleigh to visit one of my favorite all time ice cream shops (well, really it’s frozen custard), Goodberry’s. My dad used to take us there when he was lived in NC and I was happy that it hasn’t changed it’s delicious custard recipe and excited to share it with the kids. They offer chocolate, vanilla, and a flavor of the day, was well as shakes, sundaes, and “Carolina Concretes” where they mix in various toppings. It was just as good as I remembered. Next we drove a couple miles over to my friends’ house so I could visit with her while the kids played video games with their son. 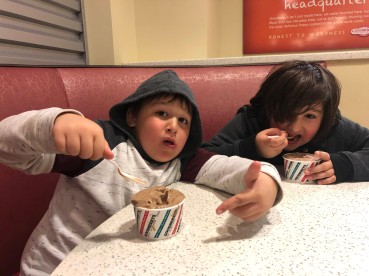 For our last morning, we ate the free breakfast at the hotel and got ready to check out. Our appointment at the Duke Lemur Center was at 11am and the kids could hardly contain their excitement. We still had a few hours to wait however, so we went over to the beautiful Duke Gardens to walk around and take pictures. 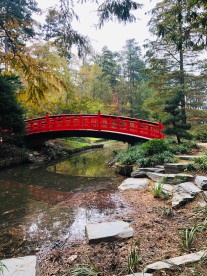 Finally it was time to head over to the Lemur Center. We got there right on time to start our tour. We were all giddy with excitement that we were finally here! The tour was about an hour and twenty minutes and the guide taught us all about lemurs and the great work they do helping and studying the various species of lemurs, several of which are critically endangered in Madagascar. They also have a center there where they work with the locals on helping to save the lemurs’ habitats while also respecting their culture and economic reasons for using the natural resources that impact the ecosystem. We were able to see several species of lemur outside in the cages, including ring-tailed and ruffed lemurs. They were lively and fun to watch. The real highlight however was the end of the tour when we went into the Nocturnal building. We were able to finally see the Aye-Aye!!! Bucket list item, check!

After we the tour we picked up some souvenirs from the lemur center and then had about an hour before we needed to be at the airport to catch our flight. We decided to go back to Tacos Nacos for lunch because it was just that good. We then drove back to the airport and turned in the rental car, forgetting to put gas in the car before we dropped it off so we got over-charged for gas. Doh! No biggie though, because everything else on the trip went about as perfectly as it could have, including a great flight home where we arrived early. We also made sure to buy some snacks on the plane to get the rest of my Amex gold reimbursement credit. In fact, the only hard part of the trip was landing into the snow, ice, and cold in Syracuse, as it had been 68 degrees and sunny in North Carolina. Oh well, at least we got to have some fun in the sun with our top down for a few days!

Overall it was a fantastic trip! We had great luck with the free car upgrade, had sunny weather, had excellent, inexpensive food, and got to see the mountains, the zoo, and lemurs! What could be better??